OSI Seven-Layer Model: Where Does Layer 0 Fit In?

To better describe and understand the complex interactions that happen in your network infrastructure, the International Organization for Standardization (ISO) developed the Open System Interconnection (OSI) model in the mid-1980s. It defines a networking framework as having seven different layers of protocols. 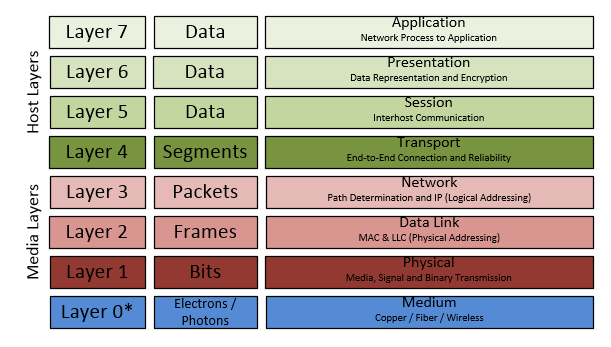 As the OSI seven-layer model describes, layer 1 is known as the “physical layer.” It’s the first and lowest layer in the model, and is where defined electronic signals are transmitted and received. It involves the transmission of raw bits – not logical data packets – and serves as an interface with the data link layer. Here is where you’ll likely find the bit stream grouped into symbols that is converted to a physical signal. Layer 1 doesn’t define things like cabling infrastructure pathways, racks, cabinets or cable management.

As some in our industry have explained, layer 1 “plays” with physical connections, such as cabling, connectors and network interface cards. But this layer does not deal directly with the physical medium: the copper or fiber cabling, for example.

Because cabling doesn’t “fit” into layer 1 of the OSI seven-layer model – and also doesn’t fit into any other layer – we like to refer to cabling infrastructure as layer 0. It’s the most important layer in your network infrastructure, and the key to ensuring consistent, reliable, fast communication among network devices (connected wirelessly or not).

Layer 1 is definitely important in ensuring reliable signal transmission. But layer 0 offers an opportunity to create a foundation that can adequately support the layers identified in the OSI seven-layer model.

Another key difference between layer 1 and layer 0 is the frequency of replacement or upgrades. The components in the physical layer as defined by the OSI seven-layer model are often replaced three to five years as technology changes. Layer 0, however, is often in place for 15 or 20 years – or longer. This means that it must be designed to last – and support whatever changes take place in that time.

On the other hand, a layer 0 that isn’t well designed or properly installed can cause:

For example: As our workplaces move toward a digital-building model, more devices will connect to networks. This will require more wireless access points to allow IP devices to connect to a wired network, as well as a cabling infrastructure that can support this influx of devices.

A digital building can’t function as intended, and provide all of the benefits promised, if its cabling system – layer 0 – isn’t designed to support it. There will be a limit to the number of devices that connect, whether or not they can communicate, how fast data transmission can occur and whether bottlenecks and slowdowns transpire during periods of heavy use.

Belden specializes in layer 0, helping enterprises select and deploy cabling infrastructure to support the people, devices and applications connecting to your network. Each layer 0 should be designed differently, based on the needs of the enterprise. We take time to truly understand what you need – and what you don’t – to address the most critical areas of your network.

Ron joined Belden in 2016 to help define the roadmap of technology and applications in the enterprise. Prior to this, he developed cables and connectivity for Panduit and Andrew Corp. Ron Tellas is a subject-matter expert in RF design and Electromagnetic Propagation. He represents Belden in the ISO WG3 committee, TIA TR42 Premises Cabling Standards and IEEE 802.3 Ethernet Working Group. Ron is the inventor of 16 US patents. He has a Bachelor of Science degree in Electrical Engineering from Purdue University, a Master of Science degree in Electrical Engineering from Illinois Institute of Technology, and a Master of Business Administration from Purdue University.