For faster deployment, the concept of direct connect is picking up steam in digital buildings as more IP-enabled devices are being deployed and connecting directly to the network for communication and data gathering. Direct connect allows you to connect a single cable to a device at one end; the other end of the cable is connected to the structured cabling cross-connect or inter-connect patch field. This allows for more efficient power delivery when using Power over Ethernet (PoE) cable, and minimizes insertion loss.

Because it’s not yet fully supported in the standards – although the standards are under development – there has been confusion among installers, contractors and consultants about direct connect. Many questions have understandably come up about proper testing techniques. How can you properly measure the field installation of direct connect?

How to Test Direct Connect

An alternative to using a patch cord test head, a component with centered performance – meaning that it has the same margin for both a high and a low plug – a centered coupler with low return loss and low mated NEXT (near-end crosstalk) can be substituted to properly test direct connect.

Two permanent link adapters and a specific test coupler can be used to perform the test (and meet Belden’s certification requirements for warranty).

The test coupler can be used: AX104552 (shown below). With centered performance, it features the same margin across the plug, whether it’s a high plug or low plug; it also meets the requirements of a test connector.

With its low return loss, low insertion loss and low mated NEXT, this test coupler can be used to test direct connect without significantly impacting overall category cable performance. By adding in this extra component with very low noise, you can achieve the margin you want during testing. Then, when the component (the test coupler) is removed, you’ll know that performance will be even better.

Using the AX104552 test coupler to test direct connect works just like an ANSI/TIA-568C.2 standard permanent link test. According to the standard, a direct connection at one end needs to have a jack; the other end features a plug terminated in the field to a horizontal cable that connects to an end device.

An example of the setup is shown on the left below (where a permanent link with two REVConnect jacks are being tested). The main and remote ends are fitted with permanent link adapters; the installer then selects and conducts the permanent link test.

To test direct connect, the same setup is used. The only difference is the inclusion of the test coupler, which connects the REVConnect plug to the permanent link adapter. 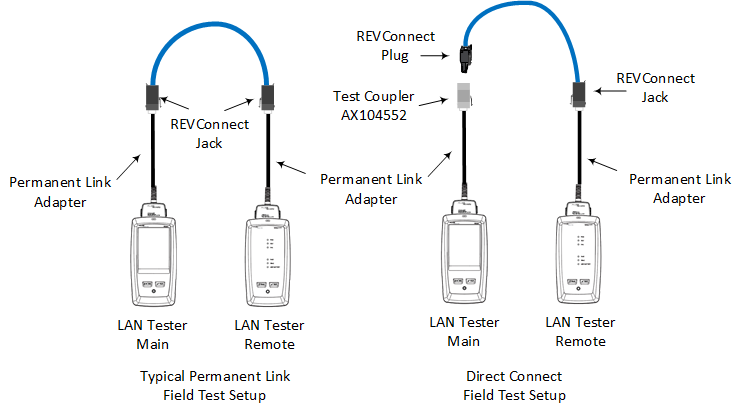 Comparison of a permanent link and direct connect field test

Until Direct Connect is Recognized in the Standards …

Belden’s REVConnect Connectivity System is a form of direct connect, which allows contractors to terminate a jack or plug onto the same universal core interface; its universal wiring manager supports Category 5e, 6 and 6A cables.

While the standards are currently under revision to include the direct-connection termination method, Belden will continue to support direct connect testing with the AX104552 coupler to qualify system certifications and warranties.

Want to see a live example of a direct connect field test? Check this out!

Ron joined Belden in 2016 to help define the roadmap of technology and applications in enterprise. Prior to this, he developed cables and connectivity for Panduit and Andrew Corp. Ron Tellas is a subject-matter expert in RF design and Electromagnetic Propagation. He represents Belden in the ISO WG3 committee, TIA TR42 Premises Cabling Standards, IEEE 802.3 Ethernet Working Group and is a committee member of NFPA 70 Code-Making Panel 3. Ron is the inventor of 16 US patents. He has a Bachelor of Science degree in Electrical Engineering from Purdue University, a Master of Science degree in Electrical Engineering from Illinois Institute of Technology, and a Master of Business Administration from Purdue University.